Jonathan Ross has touched all sides of the wine industry.He  started out washing dishes and bussing plates while in school, before launching himself into restaurants full time. Jon devoted himself to wine studies, eventually working as the head sommelier at Eleven Madison Park in New York City for more than five years, part of the team that took the restaurant to #1 on the San Pellegrino 50 Best list. A job opportunity for Jon’s wife Jane took them both to Australia, where Jon landed handily on his feet, working for the Rockpool Group as the beverage director for their Melbourne and Perth premium  restaurants.

After passing the prestigious Master Sommelier exam in 2017, Jon began to indulge his winemaking interests, first realized while working harvests in the Finger Lakes of upstate New York. He worked harvest with Mac Forbes in the Yarra Valley in 2018 and decided to buy a few grapes of his own that year. He purchased a couple tons of shiraz off the Bannockburn Estate vineyard, a limestone drenched site planted in the mid-1980’s by Gary Farr. He did some gentle foot stomping, kept a selection of clusters whole, and then left the wine to its own devices in a large puncheon.

Jon has since made two other wines: a cinsault form the sandy Vine Vale region of Barossa and a pinot gris from the Mornington Peninsula. Jon’s interest is in finding exceptional sites across Australia, picking the grapes to allow for optimum expression, and doing little in the winery. Jon and Jane moved back to the US in 2020, just after Jon put that year’s shiraz, cinsault, and pinot gris to rest in barrel. They’ll return for bottling and 2021 harvest, and in the meantime are devoting themselves to launching LEGEND.
Naturally, Micro Wines is part of that portfolio.

"Wine studies have taught me about all of the different tangible things that go into producing a bottle of wine. Making wine has taught me about the importance of the human element in wine. It is paramount. Micro Wines is the product of people. Their generosity. Their willingness to say yes, and to give their time and energy to a new friend." 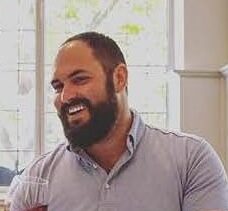 “As this is his own label, Jon has to sit this one out! Certainly, I am not without bias on my husband’s wines, but sometimes I’m an even harsher critic because of it. But I will say this: Jon has one of the best palates in the biz, and he’s been able to  translate that into an instinct for great vineyards. The sites he’s picked, the vision he has for each wine, and his ability to execute on that vision has been astounding to watch. And perhaps the greatest compliment of all: I’m always excited to drink them.”

“Ross currently makes a light, crunchy and super-bright cinsault from Barossa’s Vine Vale, a Rhône-like syrah from the Bannockburn Vineyard and a textural Mornington Peninsula pinot gris…But, you can be sure there’s more to come, as Ross’ model is that of micronegociant, finding special parcels and elaborating them in a way that responds to fruit and site.”