Sierra Reed has become a prominent figure in Australia’s wine scene in the few years since Reed Wines launched in the 2015 vintage. Sierra came to the world of wine in a circuitous fashion. Her first career was in modeling, which despite the faults she identified in the industry, gave her the opportunity to travel and see the world. She parlayed her modeling into a brief career in television: a season on the reality show Survivor followed up by a travel show based in New Zealand. All these pieces of the puzzle led her to this moment: while shooting with winemakers in New Zealand, Sierra realized that making wine was what she wanted to devote her life to.

This series of experiences, relationships, and lessons led Sierra to start her eponymous winery with the 2015 vintage in Australia. Sierra has devoted herself to making single vineyard bottlings of special plots across the country: everything from Heathcote nebbiolo to Barossa grenache to riesling from her home region of Geelong. Her winemaking is not programmatic: each vintage is treated sensitively and
intuitively, with the goal to make an expression of the land and the year. The only additive the wines see is a minimal amount of sulfur

CLICK ON THE VINTAGES BELOW FOR TECH SHEETS AND TASTING NOTES

Everyone in the world of wine has a story to tell. The motivation is often the same, but the experience is always very personal. The wines I make tell my story and are a reflection of all the lessons I have learnt along the way.” 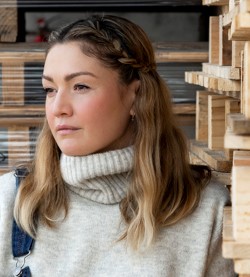 “Sierra is the definition of an intuitive, hands-on winemaker. She’s done the training that allows her to trust her instincts, and she does. She’s out in her vineyards every day leading up to vintage, harvesting when she tastes the right balance. She responds to what the wines need in the winery rather than imposing an agenda. The result? Every wine, every vintage these wines are delicious and complex, yet totally accessible and drinkable. They’re our household staples.”

“Sierra’s house style goes beyond simply ‘making good wine’. Putting her on the map with more gusto than any amount of vintages ever could, these are wines of instinctual elegance.”

“Sierra Reed is a star on the rise…easily one of the best Australian wines we’ve tasted this year.”