Samantha Connew (Sam to her friends) grew up on the South Island of New Zealand, and put herself through school working at a wine bar. Sam was bitten by the wine bug, and ended up travelling the world, working vintages in Oregon, Italy, Spain, and Australia. She landed in Australia, spending ten years as the senior winemaker at Wirra Wirra in McLaren Vale before putting down roots and starting her own winery
in the Coal River Valley of Tasmania.

The name “Stargazer” pays tribute to Abel Tasman, who as an explorer and navigator, must have spent a fair amount of time gazing towards the heavens. Tasman, a Dutchman under the employ of the United East India Company was the first European to sight Tasmania (on November 24 1642) and then the South Island of New Zealand, 19 days later on December 13. He is the natural link for Sam, connecting her
original home of South Island New Zealand to her current home of Tasmania.

Located in the Tea Tree subregion at the northern end of the Coal River Valley, Sam’s original vineyard was planted by Norm and Jan Gangell in 2004. Pretty much half and half riesling and pinot noir, the eleven hectare property is also home to an olive grove (which produces some killer olive oil!). Sam took over the property in 2016 and in late 2017 expanded the vineyard to include an additional two hectares of vines: more pinot noir (four clones), some chardonnay (another four clones) and more riesling. She also farms a bit of Gewürztraminer, Pinot Gris, and Pinot Meunier to keep things interesting. She believes fundamentally in sustainable farming and is excited about leaving her bit of dirt better than she found it.

“To know you’re solely responsible for the entire wine production process, from beginning to end, is really exciting, but it’s also pretty terrifying... Until four years ago, my whole career had been just about making wine. Twenty years’ experience had taught me the basics, so when I first arrived in Tasmania I thought I knew a fair bit about how grapes grow. But when you’re out there in the vineyard, working day-to-day, there is so much to get your head around." 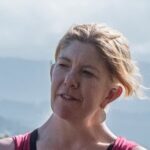 “Traditional Australian riesling (from the Clare and Eden valleys) is bone dry, sternly acidic, and dominated by petrol aromatics. Sam is putting a
different foot forward for Australian riesling; we’re reminded of the Rheingau, Rheinhessen or even Alsace when we taste these wines. Expressive, nuanced, balanced, and just totally delicious: from the rieslings to the “gentil” blend to the totally unique combo of pinot noir and pinot meunier…we love it all.”

“It is a labour of love for Sam, making small quantities of wine from small parcels of fruit. Striving for individuality and quality. Sam’s wines are beautiful, ethereal representations of the Apple Isle.”